Whithout a single scientific tool, Prince Siddhartha sat on a patch of kusha grass beneath a ficus religiosa tree investigating human nature. After a long time of contemplation, he came to the realization that all form, including our flesh and bones, and all our emotions and all our perceptions, are asembled -they are all the product of two or more things coming together. When any two components or more come together, a new phenomenon emerges -nails and wood become a table; water and leaves become tea; fear, devotion, and a savior become God. This end product doesn´t have an existence independent of its parts. Believing it truly exists independently is the greatest deception. Meanwhile the parts have undergone a change. Just by meeting, their character has changed and, together, they have become something else -they are “compounded”.

He realized that this applies not only to the human experience but to all matter, the entire world, the universe -because everything is interdependent, everything is subject to change. Not one component in all creation exists in an autonomous, permanent, pure state. Not the book you are holding, not atoms, not even the gods. So long as something exists within reach of our mind, even in our imagination, such as a man with four arms, then it depends on the existence of something else. Thus Siddhartha discovered that impermanence does not mean death, as we usually think, it means change. Anything that changes in relation to another thing: even the slightest shift, is subject to the laws of impermanence.

Through these realizations, Siddhartha found a way around the suffering of mortality after all. He accepted that change is inevitable and that death is just a part of this cycle. Furthermore, he realized that there was no almighty power who could reverse the path to death; therefore there was also no hope to trap him. If there is no blind hope, there is also no dissapointment. If one knows that everything is impermanent, one does not grasp, and if one does not grasp, one will not think in terms of having or lacking, and therefore one lives fully.

Siddhartha´s awakening from the illusion of permanence gives us a reason to refer to him as the Buddha, the Awakened One. Now, 2500 years later, we see that what he discovered and taught is a priceless treasure that has inspired millions. On the other hand, if Siddhartha were here today, he would be more than a little dissapointed, because, for the most part, his discoveries lies fallow. That is not to say that modern technology is so great that his findings have been refuted: No one has become immortal. Everyone must die at some point; an estimated 250000 human beings do so every day. People close to us  have died and will die. Yet we are still shocked and saddened when a loved one passes away, and we continue to search the fountain of youth or a secret formula for long life. Trips to the health food store, our bottles of DMDAE and retinol, power yoga classes, Korean ginseng, plastic surgery, collagen injections and moisturizing lotion -these are clear evidence that we secretly share Emperor Qin´s desire for immortality.

Prince Siddhartha no longer needed or wanted the elixir of immortality. By realizing that all things are assembled, that deconstruction is infinity, and that not one of the components  in all creation exists in an autonomous, permanent, pure state, he was liberated. Anything that is put together (which we now understand to be everything) and its impermanent nature are bound together as one, just like water and an ice cube. When we put an ice cube in our drink, we get both. Just so, when Siddhartha looked at someone walking around, even the healthiest person, he saw this person as both simultaneously living and disintegrating. You might think this doesn´t sound like a fun way to live, but it can be an amazing ride to see both sides. There might be great satisfaction. It is no like a roller coaster of hope and dissapointment going up and down. Seeing things in this way, they begin to dissolve all around us. Your perception of phenomena transforms, and in a way becomes clearer. It is so easy to see how people get caught up in the roller coaster, and you naturally have compassion for them. One of the reasons you have compassion is that impermanence is so obvious, yet they just don´t see it.

What makes you not a buddhist. Dzongsar Jamyang Khyentse 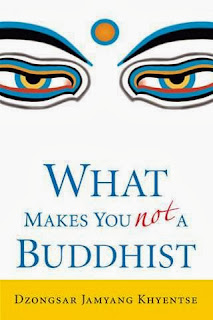